The Daugava River and its primeval valley is one of the most impressive and grand nature’s formations in Latvia. As are the landscapes of Daugava – the unique Bends of the Daugava River (Daugavas loki), its wide delta, picturesque views of the valley terraces and steep slopes, and the shores rich with forests, waterscapes of rapids or the slow and steady Daugava’s flow. Also, territorially the Daugava River is one of the most important natural features, playing a huge role in the historical and political geography of the territory of Latvia. For a long time, Daugava has served as a bordering river in the political map of Latvia, as a corridor for trade and conquest, as a place for decisive fights and fortifications, as an icon for the Third Awakening in Latvia (the Singing Revolution). These historical and geographical aspects have made Daugava the significant and powerful symbol for the river of destiny (Likteņupe).

The cultural landscape of Daugava is as grand as its natural heritage – inhabiting the shores of the river, travelling along it and controlling it, the cultural landscapes of Daugava are formed – ancient settlements, castle mounds, farmsteads and villages, castles and fortresses, bridges and protecting dikes. The shores of Daugava hold unique cultural landscapes and national identity values – Daugavpils fortress, Koknese Castle ruins, St Meinard’s Island, Death Island, Vecrīga skyline and many more. Daugava is rich in diverse and far view landscapes, which can be visible in all their beauty from adjacent roads, bridges, dams, castle mounds and riverbanks.

Daugava begins in Valdai Hills, Russia – it streams out of Koryakino marsh down the glacial valleys, circling around uplands, flows to the Gulf of Rīga. Daugava enters Latvia’s territory as a large and wide river and continues another 352 km until it reaches Rīga. The width of Daugava in Piedruja–Daugavpils section is 200 m, near Rīga – 650–700 m, but in Mīlgrāvis the river is twice as wide. In two sections Daugava flows through plains, but to break through the glacier-made uplands, it uses primeval valleys, formed before the last ice-age. It bends in this type of primeval valley in the Piedruja–Daugavpils section, also in the Middle Latvian Declivity, from Pļaviņas to Ķegums it flows through a glacier-made valley.

In Latvia, Daugava has many tributaries rich in waters, formed mostly on the right shore of the river, creating picturesque landscapes of their meeting points. In the flood season, Daugava historically is described as a threatening river – when the river rises above the shores, for example, in Rīga, floods have destroyed bridges, taken away ships into the sea, and destroyed suburban wooden buildings. With the construction of hydroelectric power stations (Ķegums HPP and later also Rīga HPP), the flooding season is no longer a threat for the lower reaches of the river and Rīga, but in the Krāslava-Daugavpils section and downwards from Jēkabpils there still are ice streams that create impressive ice dam landscapes.

Daugava is the richest river in islands – around 80 just in the territory of Latvia. Most of them are tiny alluvial islands, found in the flat parts of the river, larger ones are formed during the ice dams that result in changes in the course of a river. Visually attractive landscapes are the Ābeļu island group near Jēkabpils, and down the river near Jēkabpils there are the large Sakas Island. However, the richest part in islands is the lower reach of the river Daugava – Doles Island, Zaķusala, Ķīpsala, Kundziņsala etc. The Daugava valley and its slopes, gullies and glens, flood plains and terraces form magnificent views, which are made up of diverse biotopes, including both boreal and nemoral biome species. Overall, Daugava valley can be regarded as an essential ecological corridor – both historically (when the glacier retreated, and climate changed) and nowadays it is one of the most important routes of species expansion in the territory of Latvia.

Culturally and historically Daugava has been not only a road, space of various connections and cultural influences, but also a strategic position in the formation of settlement centres and a border that marks the cultural regions of Latvia. The busy landscape of the Daugava waterway historically is shaped both from the ships of merchants and raiders, and from the fishermen boats, barges and timber rafts. However, for sailing the most important was the lower reach of the river, which forms the Rīga port landscape of Baltic Sea importance in the delta of Daugava River.

The two largest cities in Latvia – Rīga and Daugavpils – are formed on the shores of Daugava, and they are the centres of cultural and economic life; there are other smaller, but equally historically important towns and villages, that are connected with the river in their economic life. Their historical formation is various – some are evolved in fortified places (Krāslava, Daugavpils), others – in the waterway as places of trading and realying of goods (Jaunjelgava, Jēkabpils), others as seasonal villages and resorts (Ogre, Koknese, Iķšķile) or hydroelectric power station centres (Salaspils, Aizkraukle, Ķegums).

The economic value of Daugava embodies not only a space for living and commuting, it is also an important energy resource. In the beginning of the 20th century it was well-known fact, that the “Latvian beauty – the magnificent Daugava, hides a lot of energy in its white waves,” (K. Zariņš) or that the waterpower of Daugava “is one of the future cornerstones of Latvia’s economy,” (I. Sleinis). The latent energy reserves of Daugava during the 20th century are realised as large projects, building a cascade of three power stations, spanning from Pļaviņas to Salaspils. In this part the Daugava landscape has changed drastically – the rapid riverbeds and impressive steep shores are flooded, creating large water-reservoirs – the “lost landscape” of Daugava.

In Latvia, Daugava can be divided into five sections that go through different landscapes, mainly determined by the geomorphological conditions of the valley. In the upper course the Piedruja–Daugavpils section is located in a terraced primeval valley, here the river has nine large bends, forming splendid and unique landscapes of the terraced forests, gillies, tributaries and steep slopes. According to geographer Guntis Eberhards, it is the oldest primeval valley in Latvia, the most complex and diverse part of Daugava valley. For protection of landscapes and nature values here have been established “Augšdaugava” and “Daugavas loki” specially protected natural territories, which embody not only diverse cultural space (for instance, old-believer villages and manors), but also the struggle against flooding of the valley in 1980s, stopping the construction of the Daugavpils hydroelectric power station.

Down from Daugavpils, where the river turns north, in Daugavpils-Pļaviņas section the river flows through a plain, taking in a large amount of water from its tributaries. Here Daugava becomes wider and, due to the gentle gradient, flows more calmly. Down the river from Jersika, dolomite can be found in the riverbed, forming rapids, and in the steep banks. The diversity and scenic landscape here are complimented with the many islands of Daugava.

When taken the waters from Aiviekste river basin, in the Pļaviņas–Koknese section the river flows through a canyon-type primeval valley, which (before it was flooded) was considered one of the most beautiful in its course. Here the magnificent landscapes of Daugava were formed by the steep gradient of the river with many rapids and restless flow, the beautiful cliff landscapes, from which in many places flowed out underground waters containing carbonates, fallen-off huge dolomite blocks in the cliff foots. Here are the most important cultural landscapes located – the flooded tufa lime cliff Staburags and Pērse canyon, Sēlpils and Koknese castle ruins. Here on the island today The Garden of Destiny is located – national memorial site, which adds the symbolic (reflected in the garden’s landscape) representation of the nation’s timeline to the already culturally and historically rich and picturesque landscape.

In the Koknese–Dole island section the riverbed of Daugava is still carved into dolomite, but its shores have no longer the greatness of the previous sections. The character of the landscape nowadays is determined by the hydroelectric power station cascade, comprising three power stations with their large water-reservoirs. This is one of the most densely populated parts of the Daugava primeval valley with high concentration of historical settlements. In the less transformed primeval valley section between Aizkraukle and Jaunjelgava there are still river terraces preserved, here is the Nature Park “Daugavas ieleja” located.

From Dole Island down the river Daugava flows into Piejūra lowland, forming the diverse delta landscape, where now lies Rīga with its suburban villages. The many islands and river branches are characteristic of the river, which form the peculiar dimensional structure of Rīga as a city near a river. Also, visually impressive are the Rīga bridge landscapes, the landscape of Rīga port, Daugava jetties near its estuary in the sea.

The landscape of Daugava has gone through many changes during the last century, from which the most significant relate to the construction of power stations – the deep valley parts are flooded, irreversibly lost are the homes near Daugava shores. And equally has changed the activities in Daugava and its shores, which in many places stimulate its overgrowth. By more and more acknowledging cultural and historical, visually and nature values of Daugava landscape, there are beginning to form recreation areas in the valley, which gives the opportunity to experience the landscape of Daugava as a value of national importance. 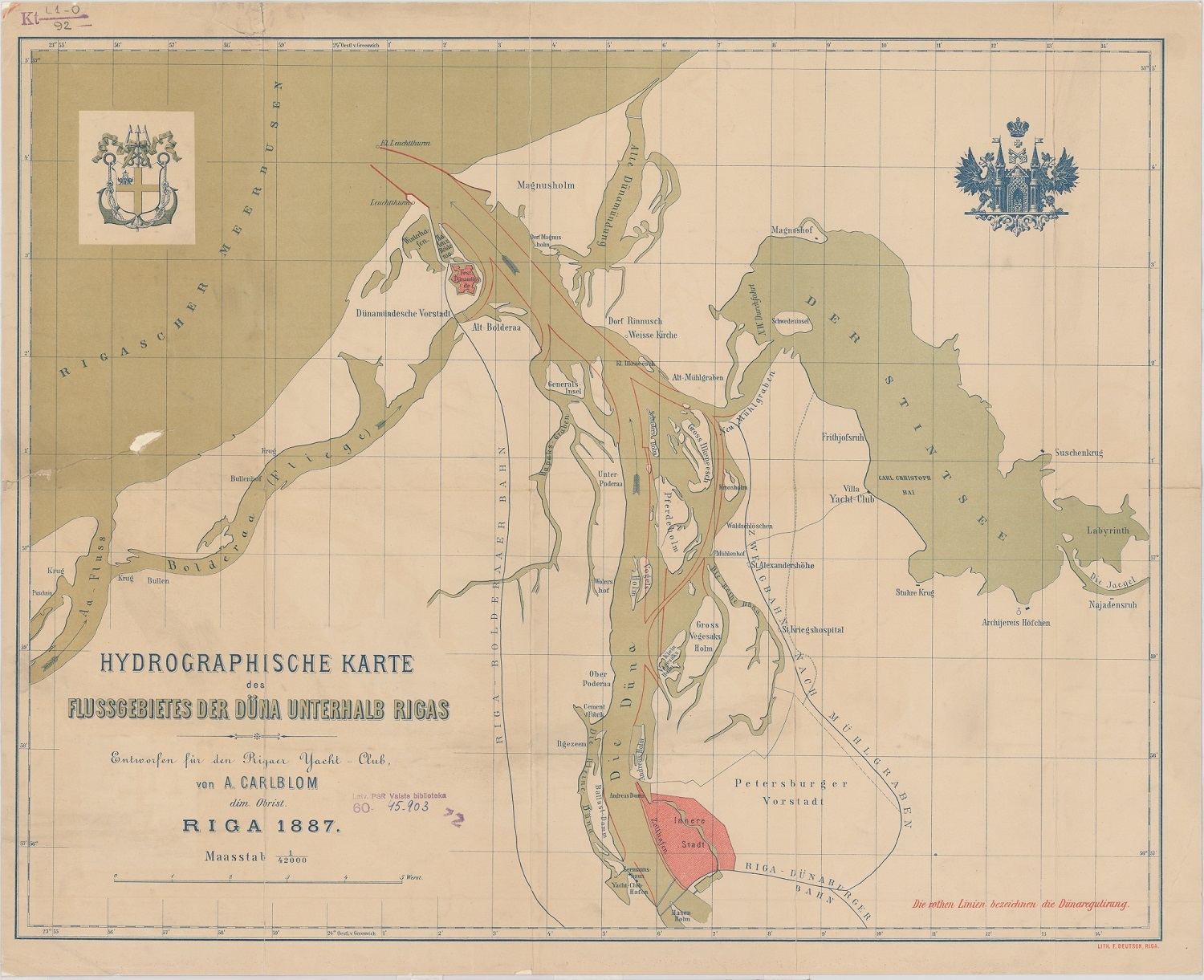 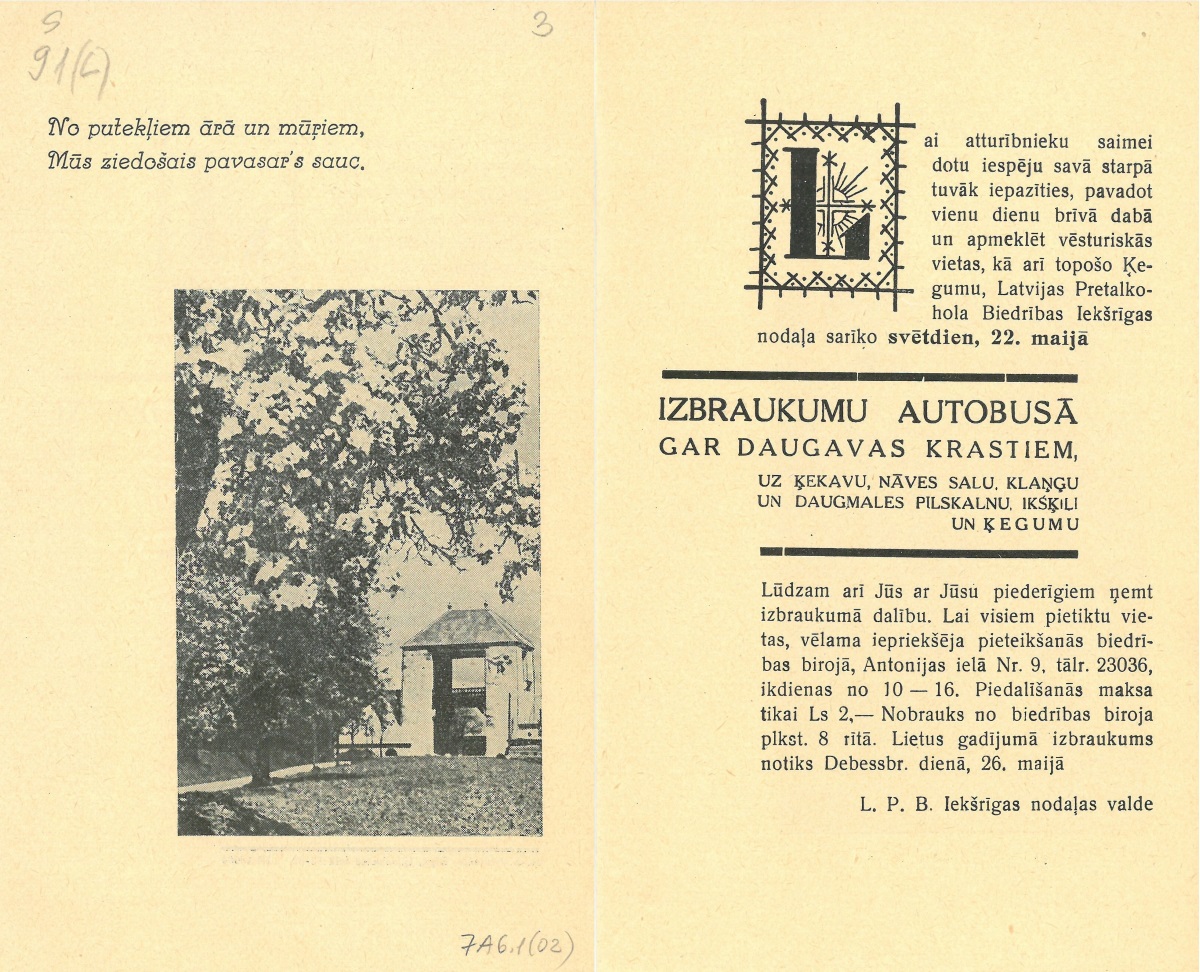 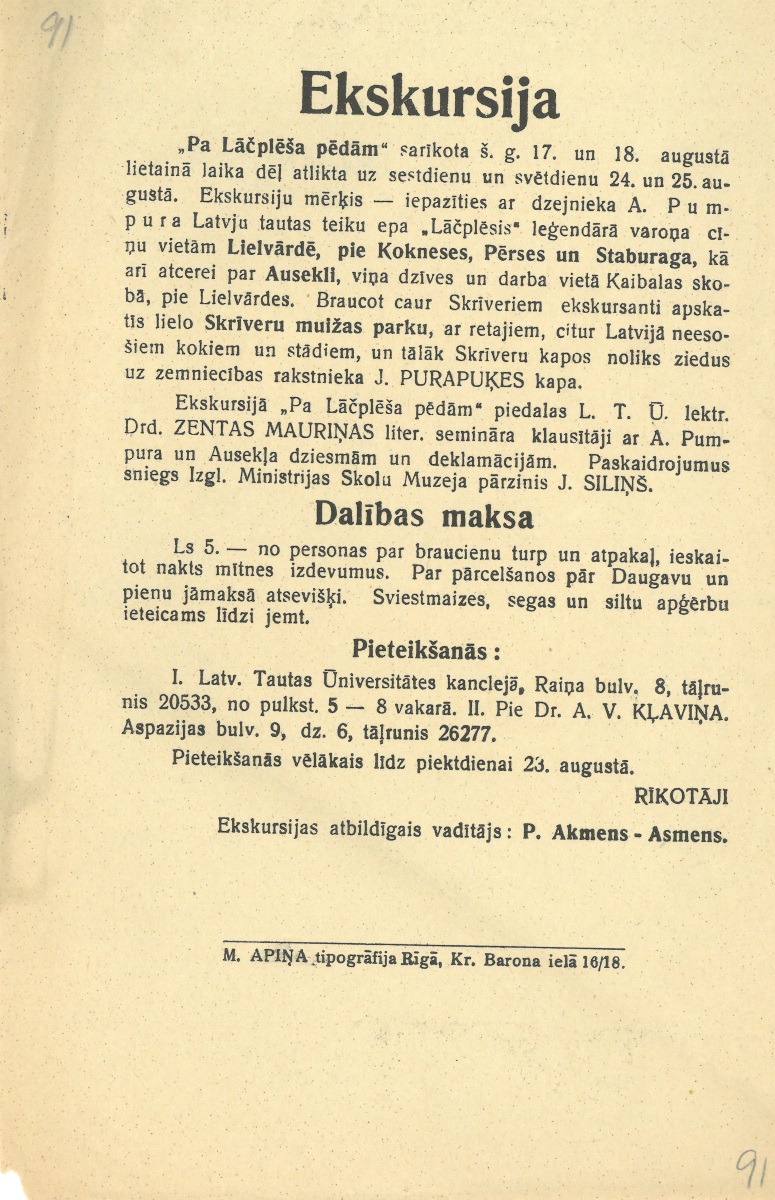 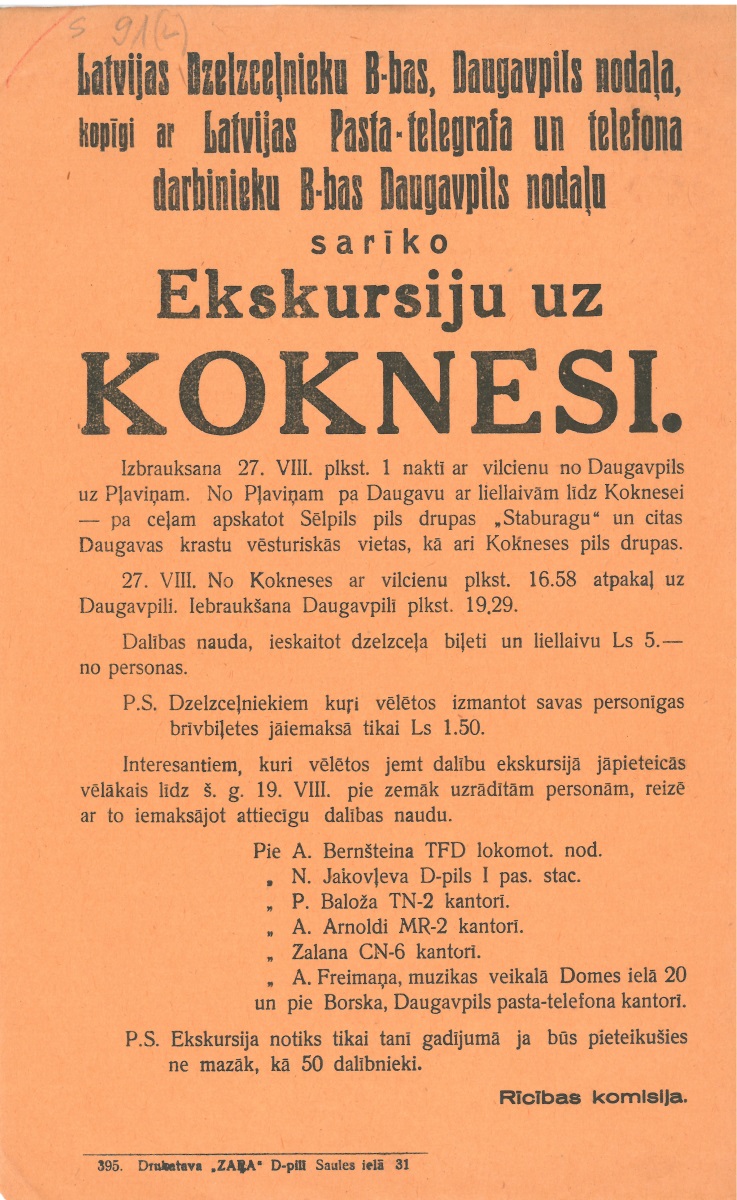 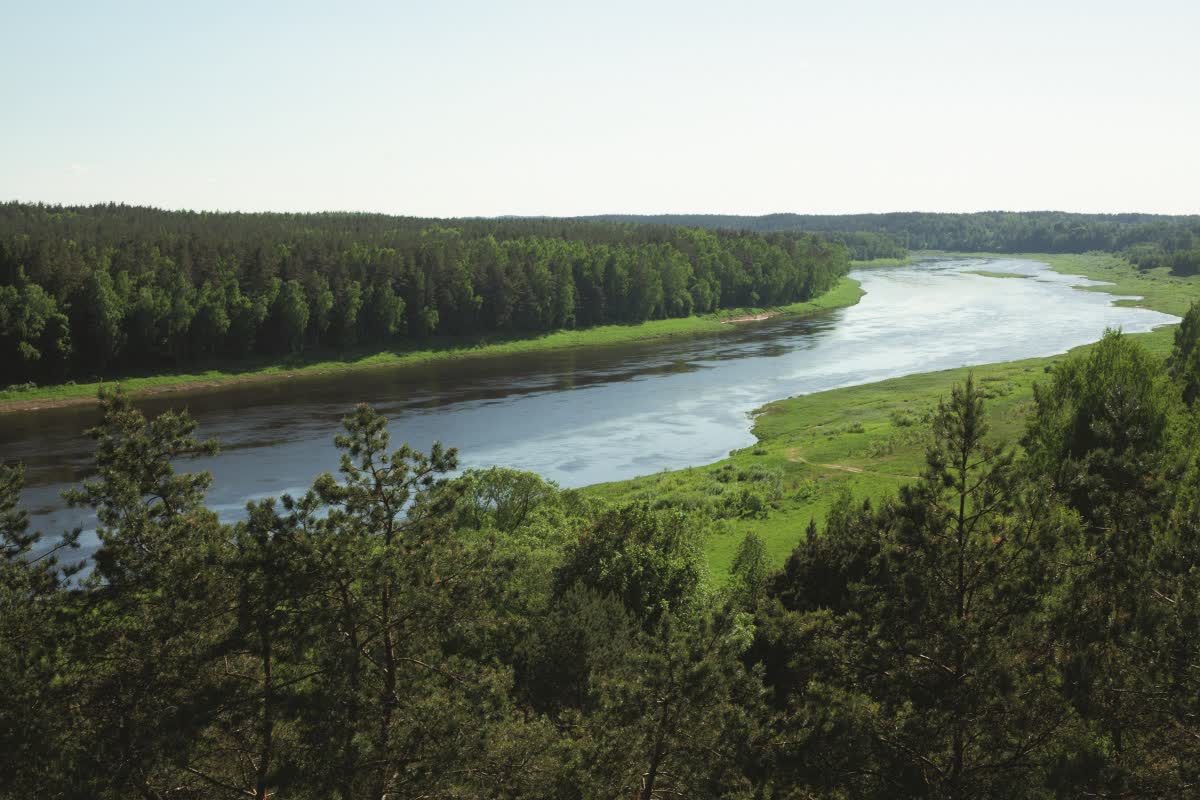 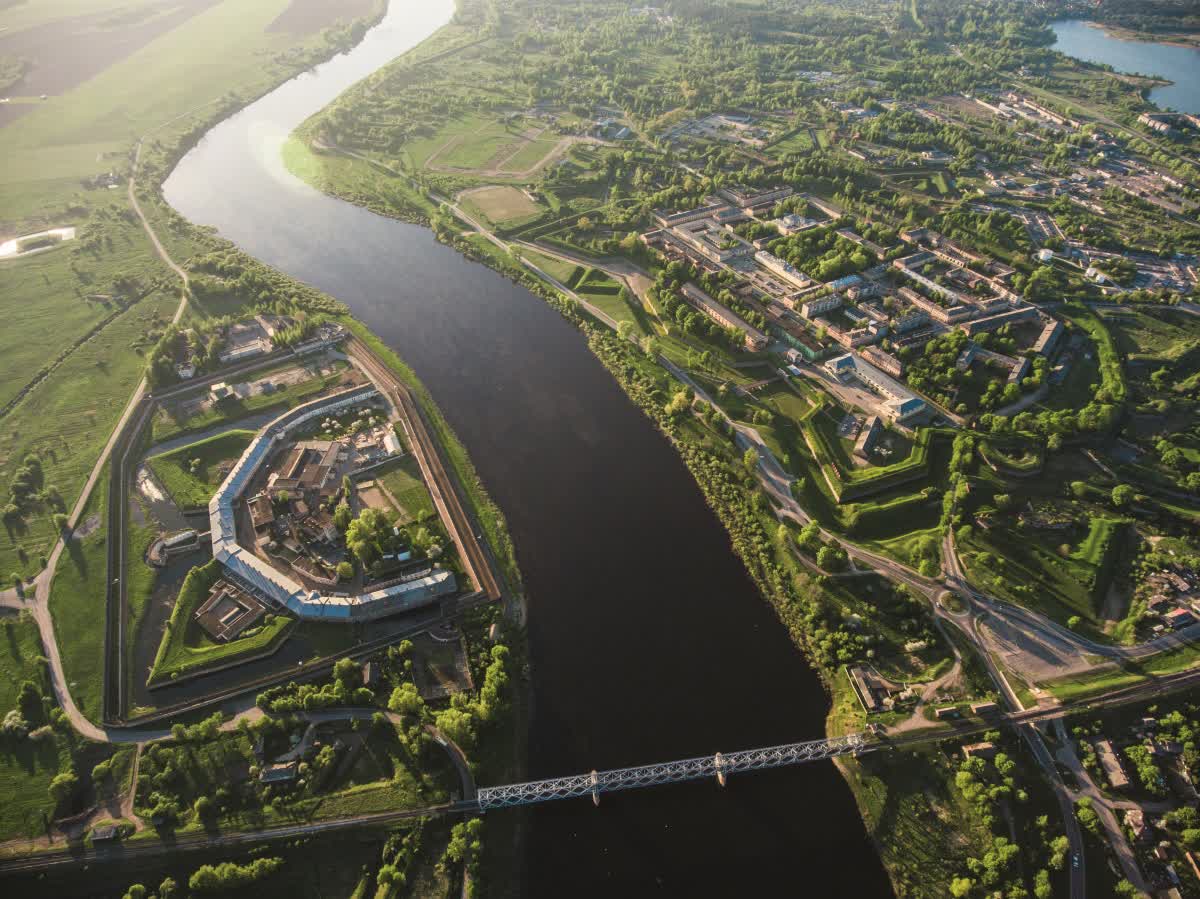 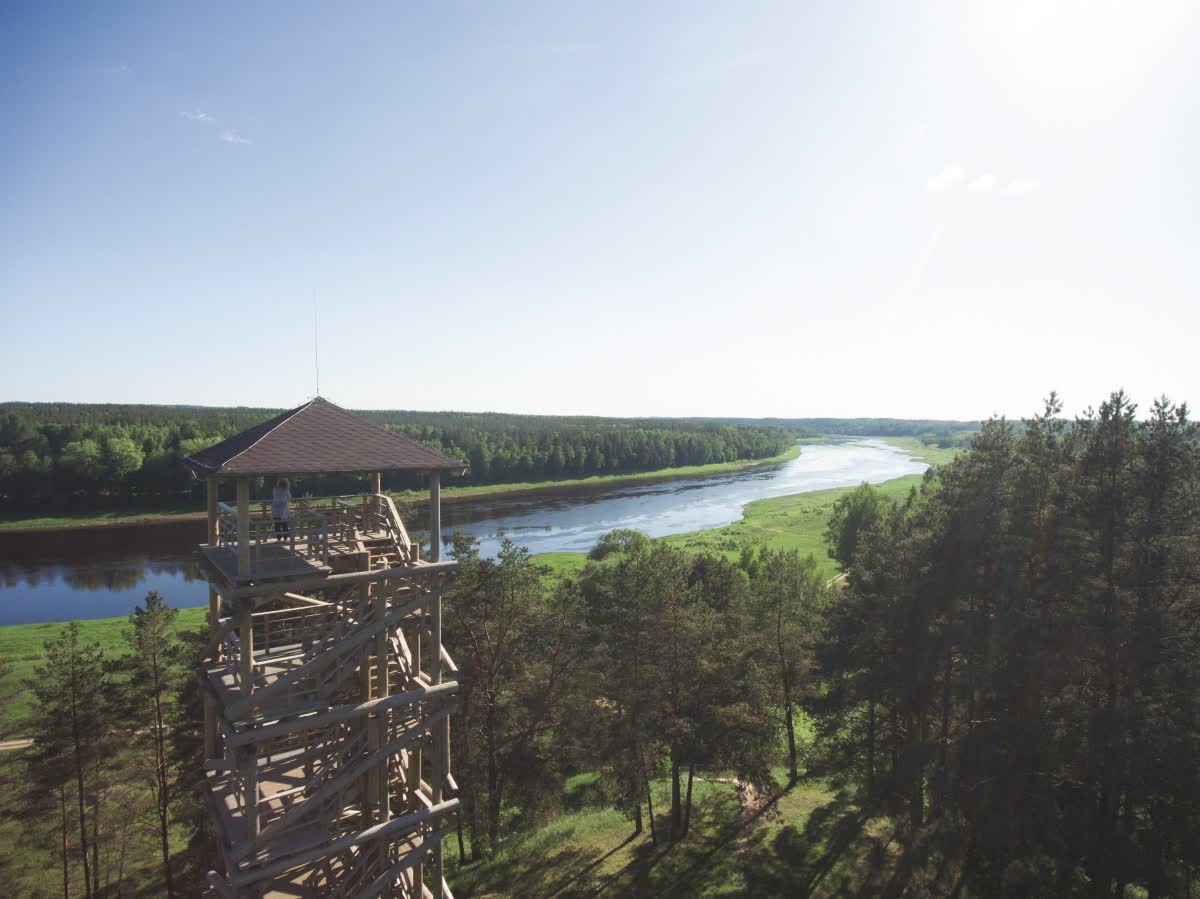 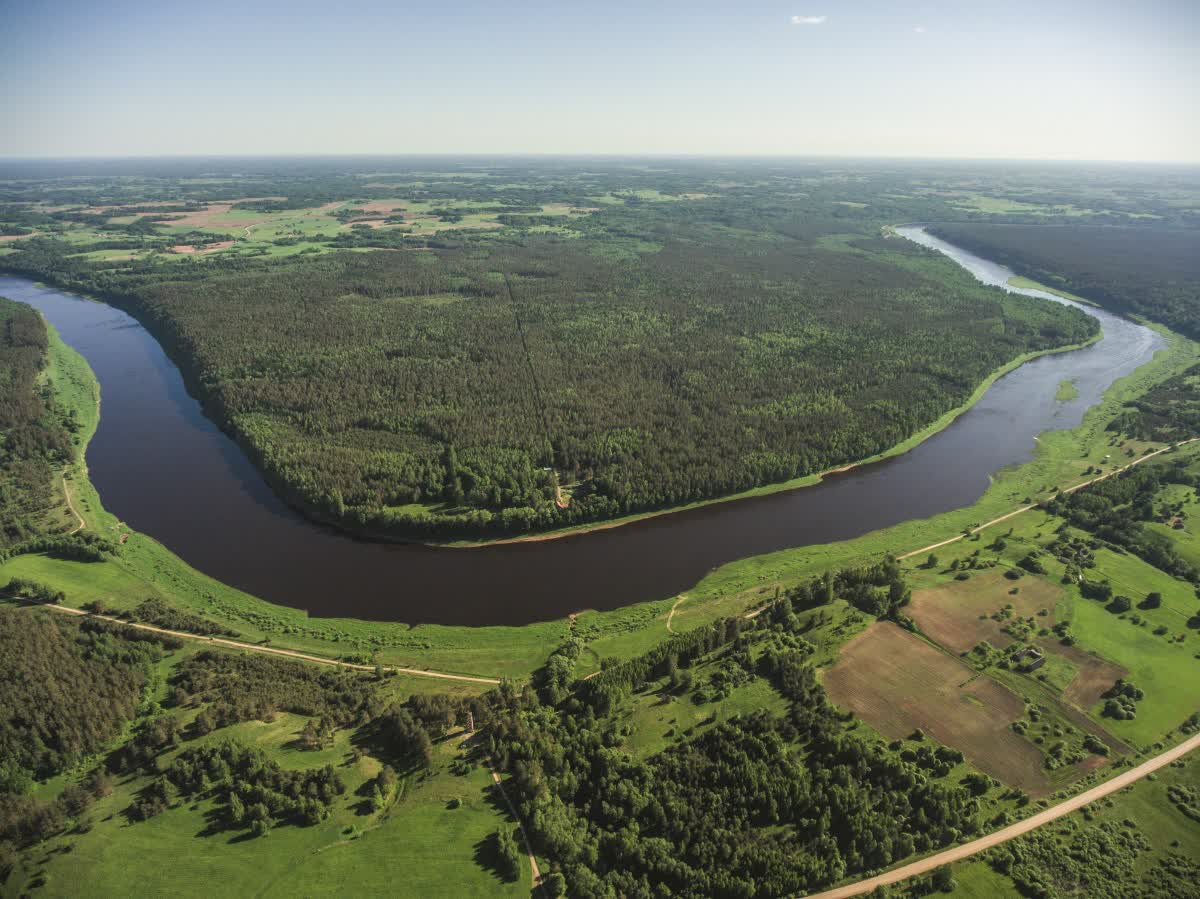 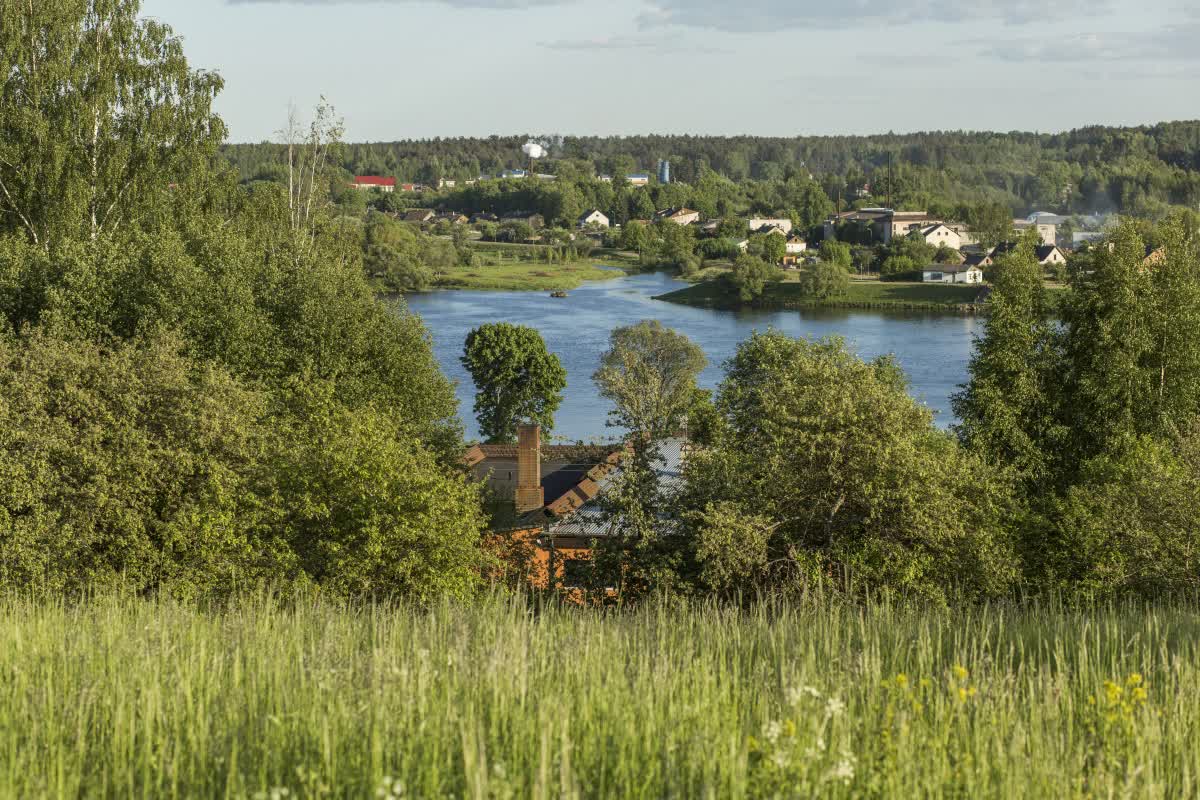 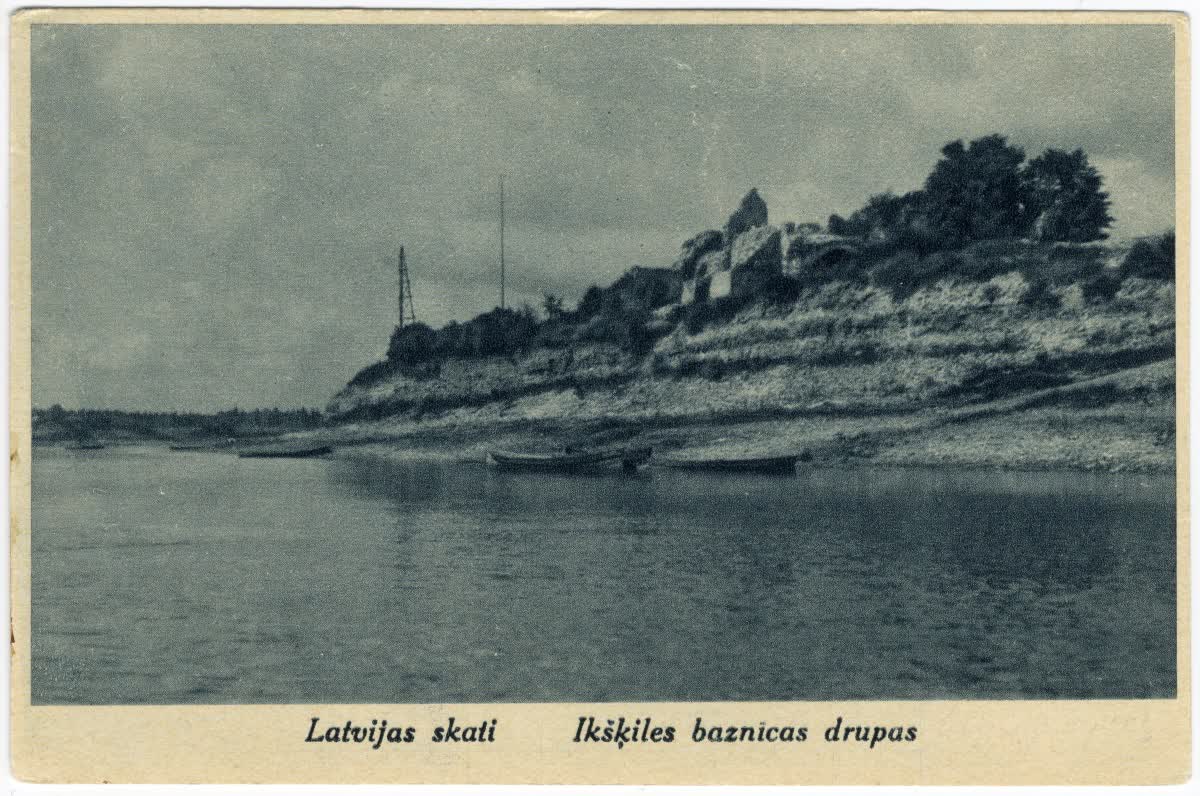 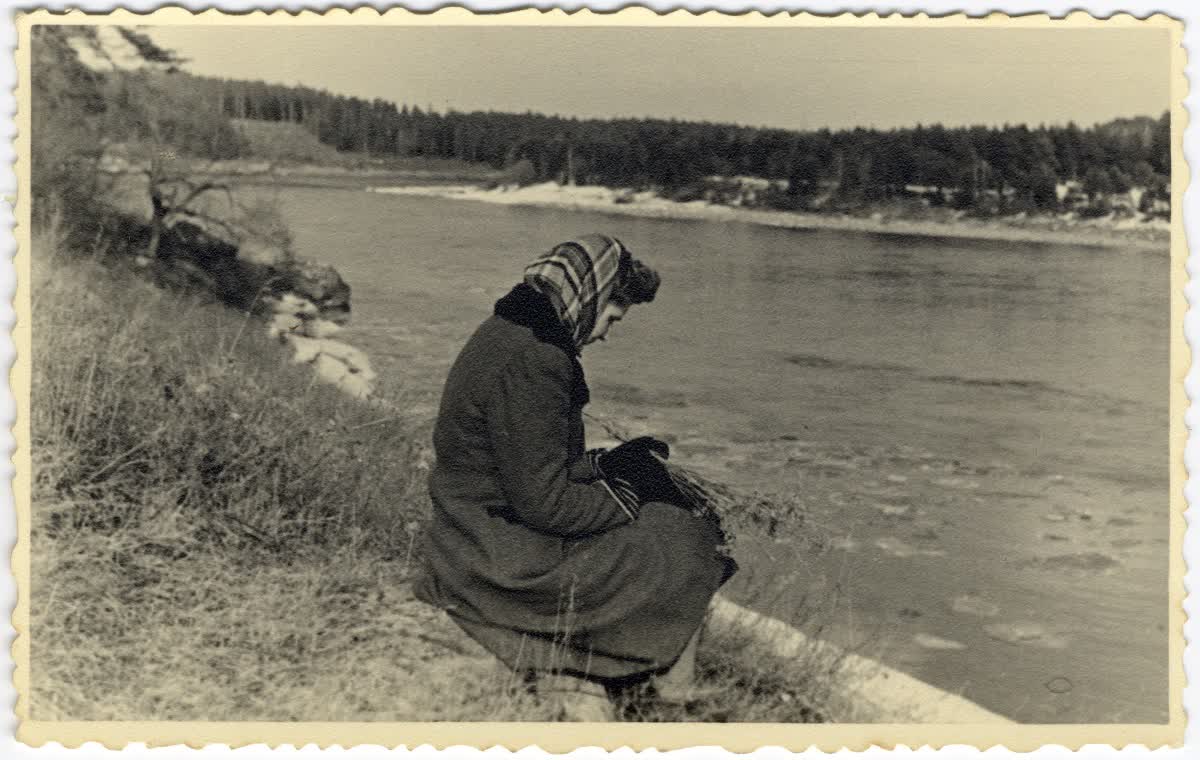 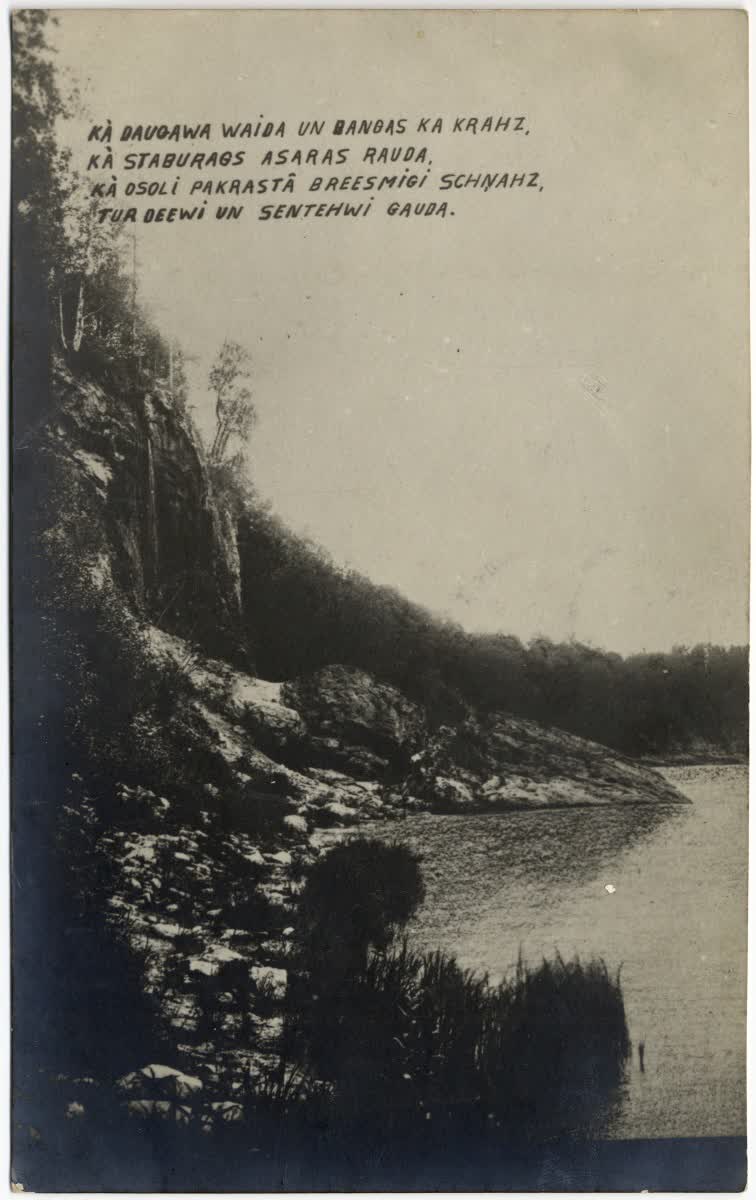 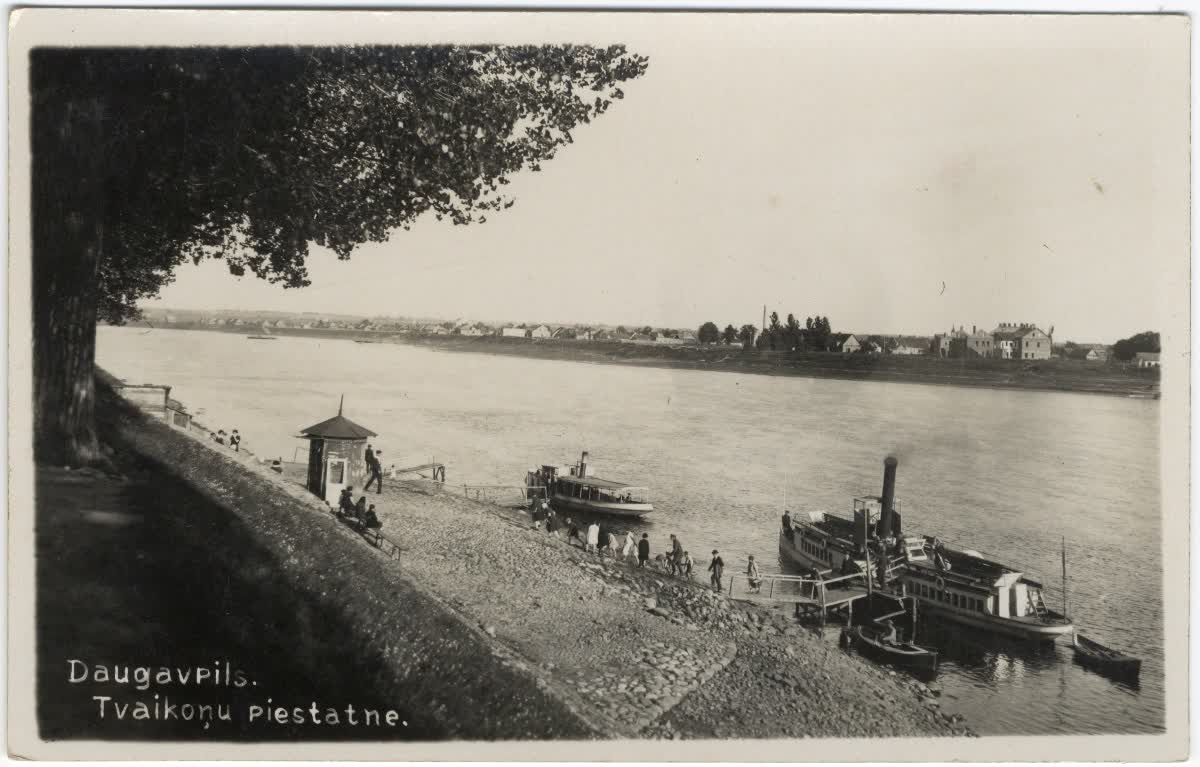 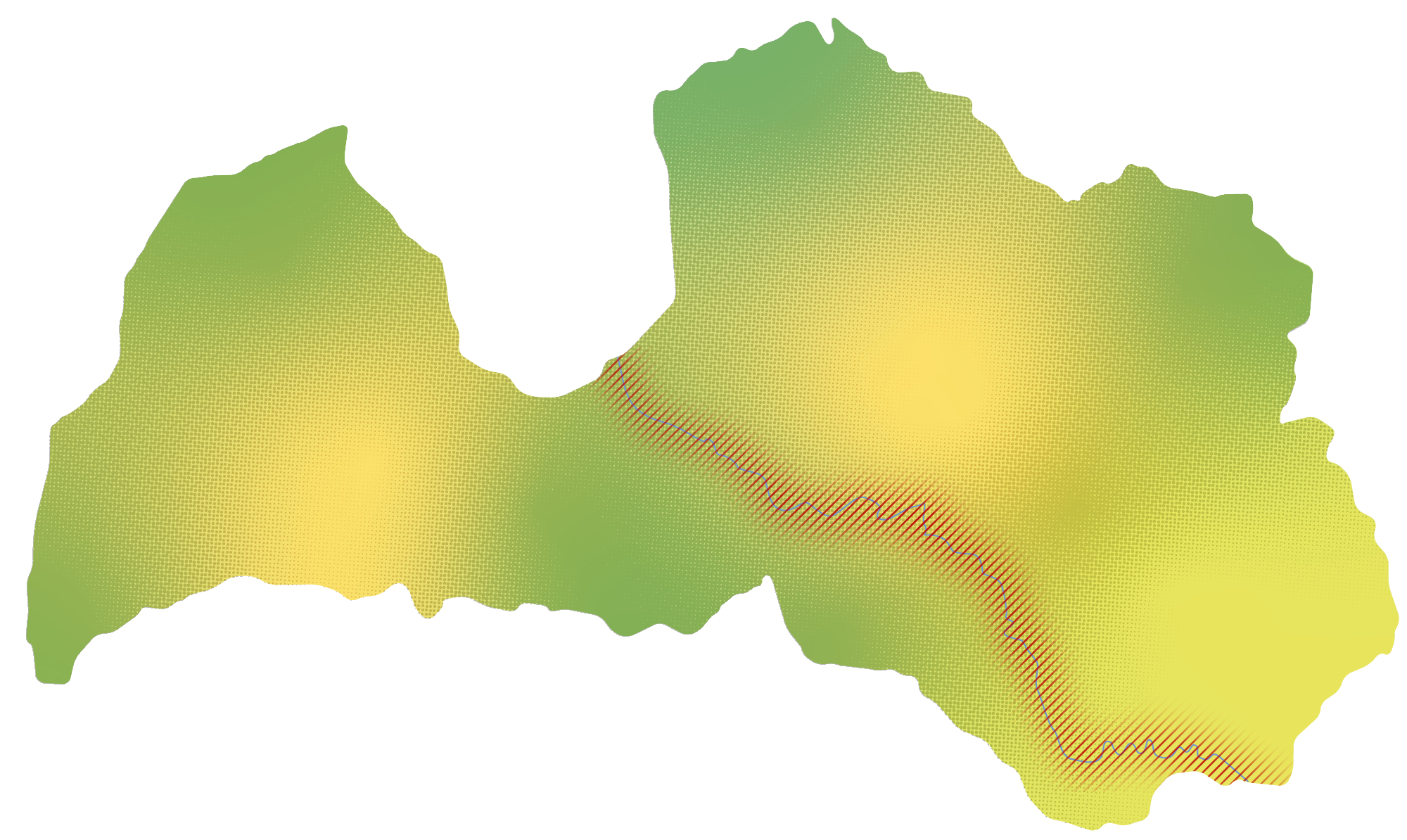 The Landscape of Zemgale Lowland