“The Artist and His Model” by Boriss Bērziņš, is a masterpiece of Latvian figurative painting of the second half of the 20th century. Using a method of painting common in iconography, Bērziņš depicts a secular scene from an artist’s studio. The originality of the work is the atypical combination of different forms of expression. Importantly, the painting was made during the Soviet period when an artist was supposed to be a simple worker who executes orders from above, yet in Boriss Bērziņš’ work the artist is a sovereign and dynamic presence.

Bērziņš created the large (140 x 108 cm) canvas in the late 1985 when he was at the height of his career and possessed the necessary virtuosity to engage in liberal experimentation. It combines previously learnt techniques and acquired painterly nuances: the collage like silhouettes, raised surface, silver leaf, lacquer. It is a striking example that shows that Bērziņš was not a part of any particular current or trend but stood alone, creating unique works where form was paramount. Characteristically, here he makes use of different media, juxtaposing oil paint, silver leaf and tempera.

Both protagonists of the painting stand out against the silver background with a gilded effect, achieved with lacquer, in the left corner. Gold and silver are materials used in icon painting and may be a throwback to Bērziņš’ childhood and visits to the Orthodox church. The art historian Laima Slava interprets the gold in Bērziņš’ paintings as bestowing nobility and transcendental meaning to the most mundane of things. The artist in the painting, seen in profile, resembles its author, whereas the model has turned her back to the viewer. In Bērziņš’ view, the human back was the very embodiment of gracefulness, and he held that no two backs were alike, every one unique and intriguing.

Boriss Bērziņš was active at a time when social realism reigned in Soviet art and figurative painting was supposed to depict plots flattering to the official ideology. With Stalin’s death and the easing of ideological pressure, however, a new generation had come onto the scene in the 1950s Rīga. While the works produced could not completely step out of the ideological strictures, more experimentation and freedom of form was allowed. Initially, Bērziņš tried to satisfy the demands of the governing regime but found the politically correct themes stifling. His outstanding talent and strong personality could not bend to fit the ideological framework. He tried all possible techniques: oil painting, watercolour, collage, charcoal, India-ink, pencil and ballpoint-pen drawings, staying true to figurative art.

Many still remember Bērziņš as a wise, humorous and charismatic personality. He was born in 1930 in Rīga and spent his childhood in the Moscow suburb of Rīga with its large Russian Orthodox population. Having noticed Boriss’ interest in drawing, his father supplied him with art albums and the young artist studied them carefully and tried to reproduce what he saw, often combining a little Vermeer, Michelangelo, and Rubens in one painting. He received his first artistic education at the Janis Rozentāls Rīga Art Secondary School and, in 1952, entered the Latvian Art Academy, graduating in 1959 and later teaching there. In his lifetime, Bērziņš fetched several important awards: Second Prize at the Cleveland International Drawing Biennale in Middlesbrough, UK (1979), Order of the Three Stars, the highest civilian order in Latvia (1995), and the Spīdola Prize for lifetime contribution to art awarded by the Latvian Culture Fund (2000) and others.

The rich artistic legacy of Bērziņš includes over 342 paintings, 293 drawings, a number of watercolours and pastels, and hundreds of sketches. Shortly before his death in 2002, he bequeathed his works to the Latvian National Museum of Art (LNMM), which is still working on structuring and researching the collection. In 2015, the Rīga Art Space held an exhibition “Boriss Bērziņš. 1930–2002. LNMM Collection”, which featured several works hitherto not seen publicly. A year later, LNMM held an exhibition “Silver/Gold” of Bērziņš’ works.

The painting “The Artist and His Model” is a part of the LNMM collection. 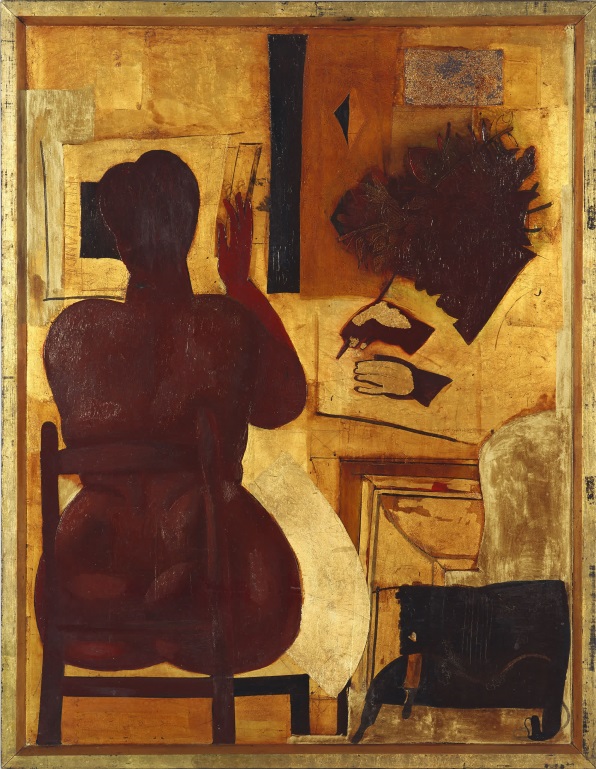 Documentary film “Boriss Bērziņš” in the series “What is There So Contemporary”. TV Rīga 24, 2014.

Laima Slava on Boriss Bērziņš in the Latvian Culture Canon, 2008. (in Latvian)

Laima Slava on Boriss Bērziņš in the Latvian Culture Canon, 2008.