A film by Rolands Kalniņš in the Cannes Classics Programme 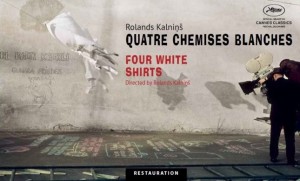 The International Cannes Film Festival will begin on 8 May 2018. This year Latvia’s participation in the central world film industry event has a sensational note as the restored version of the feature Four White Shirts (Četri balti krekli, 1967) by Rolands Kalniņš is included in the festival’s official programme, Cannes Classics.

The Cannes Film Festival is one of the central world film industry events. This year it will be held from 8 to 19 May. The festival presents its officially selected programme Cannes Classics for 15 years, and the organizers emphasize that one of the aspects in Cannes’ mission is to form the contemporary audience’s relationship with the ‘memory of the world’s cinema’. The selection of the classic films is dedicated to the praise and assessment of the world’s cinematic heritage by exhibiting a special jewel – restored prints. The central event of the 2018 Cannes Classics is the celebration of the 50th anniversary of Stanley Kubrick’s 2001: A Space Odysey (1968); also included are the pearls of cinema classics like films by Ingman Bergman, Bicycle Thieves (Ladri di biciclette, 1948) by Vittorio De Sica and Vertigo (1958) by Alfred Hitchcock. The inclusion of Four White Shirts in this selection means that the picture by Rolands Kalniņš and his creative team belongs to the highest society of the world of cinema.

The head of the National Film Centre of Latvia, the film theoretician Dita Rietuma comments, ‘Four White Shirts by Rolands Kalniņš is a work that the Soviet censorship did not accept because of its innovation, irony and nonconformism, although the film critics are fascinated by the spiritual link of this film with the most vanguard tendencies in the world cinema – The New Wave (La Nouvelle Vague) that flourished in France and resonated also on the other side of the Iron Curtain, in Eastern Europe. In a way, including of the film by Rolands Kalniņš in the classics programme of the world’s most significant film festival shows that the Latvian New Wave is accepted also in the world of cinema. Four White Shirts submitted by the National Film Centre of Latvia has stood a noteworthy selection and competition, standing side by side with masterpieces of the world’s art of cinema.’

Four White Shirts (1967) is one of the most well-known features by Rolands Kalniņš with a very complicated destiny – made in 1967, the film perfectly fits in the ruling tendencies of Modernism in the world of cinema of the time but because of its open-mindedness, youthful energy and biting irony it started a full-fledged life on the Latvian cinema screens only 20 years later, after it was shelved and excluded from the annals of Latvian cinema. Now we can be sure that the truth has finally won – 51 year after its making, a couple of days from the 96th birthday of Mr. Kalniņš, Four White Shirts appear in the spotlight of the world of the international cinema.